Does Japan “only” have four seasons?

It is said that Japan, which belongs to the temperate zone, has four distinct seasons: hot in summer and cold in winter.

In spring, flowers bloom, in summer, it is hot and clouds rise high in the sky, in autumn, the leaves change color and it snows in winter.

One thing I’m wondering is whether Japan is the only country with four distinct seasons. That’s what I mean.

The most famous work with the name “Four Seasons” abroad is “The Four Seasons” by the Austrian composer Vivaldi, which was made into a film by the American horror writer Stephen King, and “Stand by Me” which was originally titled “The Body”.

😀 <Are? Hola! I knew there were four seasons in a foreign country!

The emoticons in English-speaking countries are different from Japanese emoticons in that the face is rotated 90 degrees to the left. By the way, this is probably a picture of “smiling with the mouth open”.

:S<It’s true that there are four seasons in other countries too. I wonder if they still have four distinct seasons like Japan?

The face is rotated 90 degrees to the left, unlike Japanese emoticons. (By the way, this is probably a picture of “I’m a little confused”)

That was certainly a concern of mine as a blogger. For example, the equatorial countries of Southeast Asia, for example, would not change that much because the temperature would remain the same all year round. (Though I’ve heard that humidity changes in some countries.)

And what about Nordic, which is an insanely high latitude? Isn’t it just cold all year round and not much change? To put it in an extreme way, there are only two kinds of summer, like spring in Japan, and extremely cold winter. Either way, it’s not as crisp as in Japan, is it? That’s how I imagined the Estonian season before I actually went there.

My first visit to Estonia was in the middle of summer. 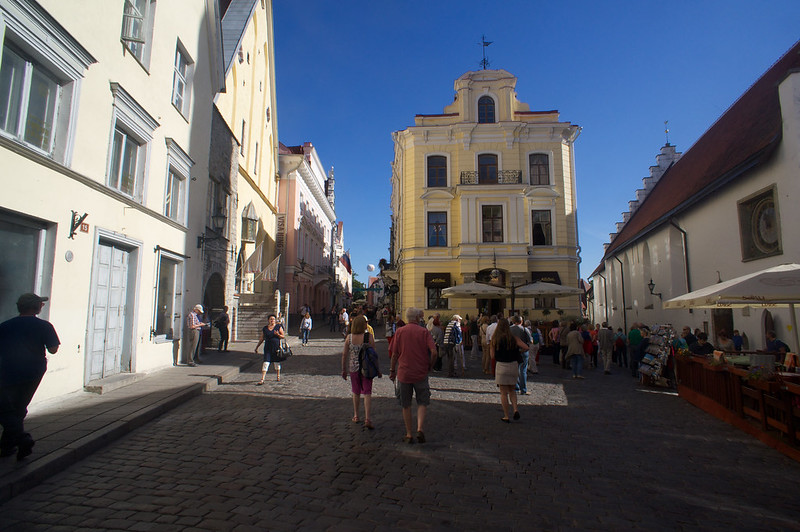 The first time I went to Estonia was in the summer. Of course it wasn’t as hot as in Japan, the temperature was a little over 20 degrees Celsius even in the daytime. It was truly comfortable. The temperature was about the same as Japan’s spring to early summer, but the difference between Japan and Estonia was the length of time the sun was out. The light in the nights were very long, as is typical of Northern Europe, and even at 10:00 p.m. it was still bright enough to make me want to go out somewhere with ease. The temperature was perfect and the nights were always bright enough to go out. The Nordic summer may well be the best in the world.

Summer is over and autumn has come to Estonia.

Autumn in Estonia is about as cold as the dead of winter in Japan. But the colors of the leaves on the trees and the scenery was just like autumn itself.

The first thing I thought when Autumn visited Estonia was
‘Huh? They’re doing it better in all four seasons than I thought…!

This was the case.

Autumn in Estonia was very cold, as I had expected. There were times when the temperature was below 5 degrees Celsius. Estonia has very long hours of sunshine in the summer, and conversely, the sunshine in the winter is extremely short, so once summer ended, the amount of sunshine was noticeably shorter day by day.

Autumn in Estonia is about as cold as the middle of winter in Japan. But the colors of the leaves on the trees and the scenery were just like autumn itself.

As you can see, it was very cold in Estonia in the fall, and by the end of the fall, there were days when the temperature was below freezing.

It’s autumn in Estonia, and despite the freezing cold, the leaves are still colored without falling off.

😀 <Oh! Fall! It’s autumn after all, even though it’s 4 degrees below zero in Estonia in November, it’s still autumn!

I was very happy about this. It would be very sad if the end of summer and the start of autumn meant only that it was getting cold and dark. But autumn in Estonia was also full of autumn colors, just like Japan’s autumn.

Autumn in Northern Europe doesn’t have to be dreary and tasteless.

Here in Estonia, 8,000 kilometers from Japan.

There are four seasons.