Hello everyone, this is Kato.

This is the fifth post I’ve made since I started my blog.

So this blog will be a rudderless blog covering a variety of information, from what happens overseas, dieting, houseplant breeding diaries (not yet decided), to some of the locals I found in Nordic who are very interesting.

I don’t want to focus on just one genre, because every day I realize that I have a lot of things I want to write about. I say “a lot”, but I guess that means “quantity” rather than quality. Thank you very much for your continued support.

How did I decide to lose weight?

Not long ago I was in Europe for an extended period of time. It was the first time in my life that I had ever lived abroad. Every day was wonderful, but of course it wasn’t always good.

I struggled with food, especially in terms of diet, which was different from Japan. Eating Western food every day, which I was not accustomed to, made me miss Japanese food, and I became homesick for food. Of course, I tried to cook for myself, but the type of rice sold in supermarkets was different from that in Japan, and the quality of water was also different. There was a limit to how close I could bring the food environment to that of Japan.

So I gave up on Japanese food and changed our goal to “Asian-inspired food”. I wanted to make sure that the food was reasonably priced. I wanted to eat as much as possible at a reasonable price.

I was wandering the streets of Berlin, thinking about Asian-like and affordable food.

That’s when I saw the picture and the words “Doner Kebab” that jumped out at me.

I felt like I had discovered the answer intuitively. I was sure of it. I felt a sense of destiny. I immediately walked into the restaurant and ordered one of the doner kebabs. Subconsciously, I ordered the “Big Doner” (size L).

The owner of the restaurant took the order, held the sword in both hands and began to cut the chunks of meat. It was the largest cooking blade I had ever seen. It’s not a knife, it’s a completely a sword.

“If that thing attacks you, you’re dead. I thought. The size of it makes it look more like a weapon than a cooking tool.

While I was thinking about this, the kebab were ready. I had them wrapped in aluminum foil for me to take home, and they were incredibly large. The shape of the to-go kebab was a distorted triangle that looked like the head of an ET.

The kebabs were temporarily placed at the counter (kebab stand) where they were placed to pay at the register. The price is an amazing 3.5 euros. Obviously cheap considering the size of the kebab. It’s obvious that it’s the best kebab in the world even before you eat it.

And finally, I’m actually going to eat it.

The first bite is… 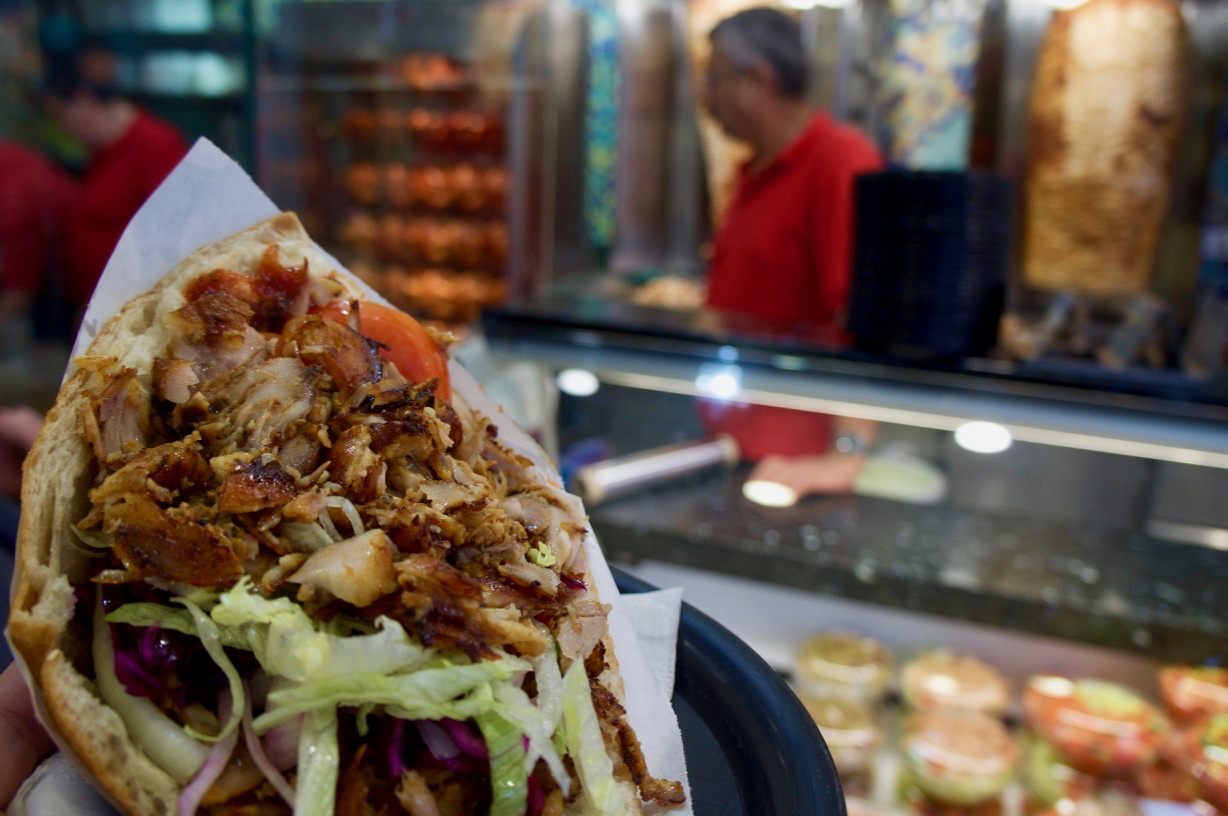 The photo shows a kebab I had at a kebab shop at a crossroads near Mitte in Berlin.

My taste buds are honest. This is exactly the flavor I was looking for. This is indeed the intersection of Asia and Europe. I was a food wanderer, and the Turkish doner kebab saved me.

And I thought to myself.

But sadly. My hopes were vain, and then terrorist attacks occurred every week in Turkey, so I couldn’t go there at all. (T_T) But I definitely want to go there someday. Yes, I will go.

There are so many kebab shops in Germany.

As a side note, the doner kebab actually originated in Berlin, not Turkey, and was invented by a Turkish immigrant. There are now more than 16,000 stores in Germany, which is more than the number of Lawson’s stores in Japan. It’s a big deal.

In researching the kebab in this way, I began to understand the position of the Turkish immigrants through the kebab, something I hadn’t seen when I was in Japan.

That’s why I’m totally addicted to Berlin kebabs. I ate at least one kebab almost every day. Berlin is a great place to hang out at night, so I also ate kebabs when I went out with my roommates at night. Some theories say that a kebab has between 700 and 1000 calories; some sites claimed it had 2000 kcal. Either way, it’s clear what happens to your body when you eat such a high calorie kebab every day and in the middle of the night.

Sure enough, my belly gradually went round and round. My weight gradually increased as well.

For the record, it’s not the kebab’s or Germany’s fault that I’ve gained weight. It’s completely because of my lifestyle. The kebabs are not bad.

But after all that, when I came back to Japan, I had gained 13kg. I got scared and took a blood test and found that my triglyceride level was obviously high.

I had to lose weight.

I started my diet when I got back to Japan.

First, I bought a book on body weight training on my Kindle.

Every day I did different parts of the strength training that it said would help me lose weight (I did sit-ups, back-ups, push-ups and squats on a daily basis). I also limited my meals to half of my evening meal to avoid overeating.

Record my weight, body fat percentage and waist in Spreadsheet every day

I used spreadsheet to record the changes in my body every day as it was written in the book on muscle training.

Three months after I started my strength training for weight loss

I feel like I’ve gained muscle and my body lines have changed a bit, but I haven’t lost any weight. The percentage of body fat I saw on the body composition meter was hardly reduced either.

I knew that in order to lose my body fat percentage in earnest, I needed to do aerobic exercise.

When I read a book on strength training, I was shocked to read that “lower body muscles account for 70% of all muscle mass” . This means that it seems to be far more efficient to do exercises that use your legs when increasing calories burned.

The muscles of the lower body are 70% of all the muscles in your body.

Mentally, it’s relatively easy cardio workout that burns a lot of calories -> bike is the only way to go!

Bicycles were the only way to get there. The doctors at the hospital where I went to get my blood work done also recommended bicycles.

I love to ride my bike outside. But…

I used to buy a cross bike and ride it across Osaka. Of course, riding across Osaka is a good way to burn some calories. 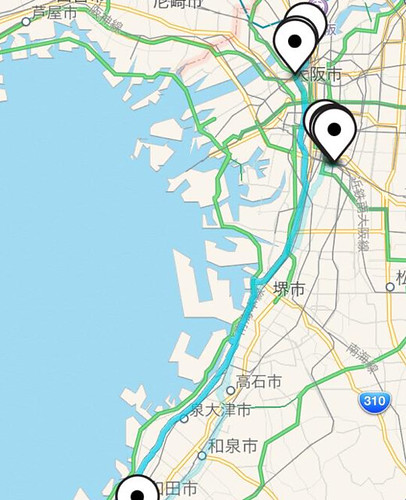 We went across Osaka to Kyoto. 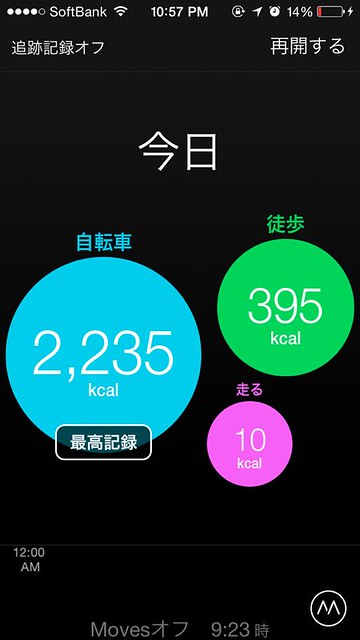 I burned an astonishing 2,235 calories from the bike alone!

As expected, I took the bike apart and packed it in a bag for the express ride home.

Riding a bike outside is risky for me.

I’ve given up on riding my bike outside. Then I can just ride indoors 😀

That’s right. If you can’t ride outside, it’s easy. You can just ride your bike indoors!

So I decided to buy an aero bike. For now, I chose one that seemed to have a good reputation on the internet and was reasonable.

A new model of the ↑ actual one I bought.

As soon as I began to pedal the exercise bike, the results were immediately apparent.

When I started riding my exercise bike, I saw results within a few days. My weight suddenly dropped to a level that had never dropped before. This is awesome. I thought.

Pedaling around on an exercise bike like a hamster. 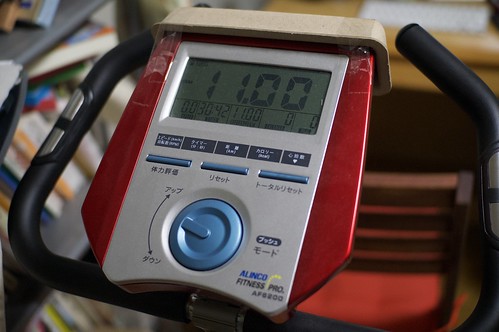 And then I started losing weight.

I was interrupted by knee pain and a stagnant period of weight loss along the way: ・・・・ 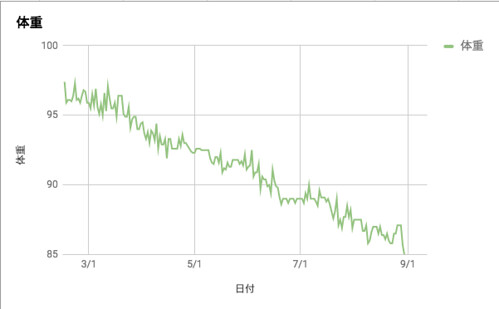 You might think 85 pounds is still heavy, but that’s the upper limit of my proper weight for now since my high school days 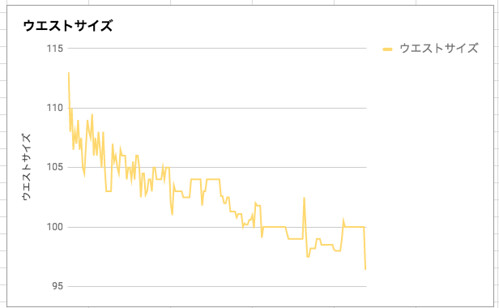 My waist size is down six inches!

I’m sure the crunches (abdominal exercises) will do wonders for me. 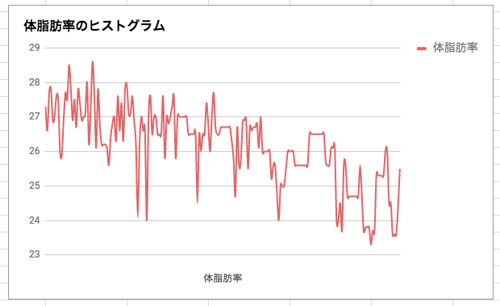 It’s hard to say because body fat percentage increases or decreases significantly depending on the amount of water in the body, but you can see from the graph that it has decreased by nearly 2%. 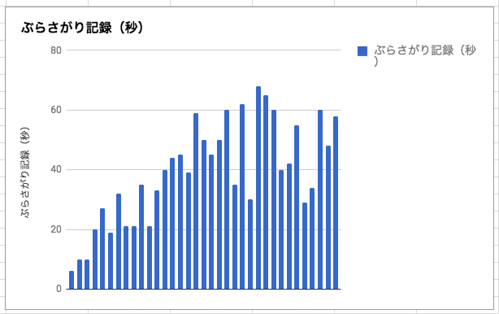 The is true. Limit your diet to some extent (take more protein). You can lose weight by riding around indoors and on an exercise bike and recording your body composition monitor. That’s all there is to it. (I used to do the aforementioned body weight training along with my exercise bike.) There is nothing more I have to say on this subject.

At the end of the diet article.

I’m sure you have a lot of information and experience with diets. I’m sure there are some of you who would disagree with my methods.

But here’s the fact that I’ve lost 13 kilos, so I’d like to write about it here for now.